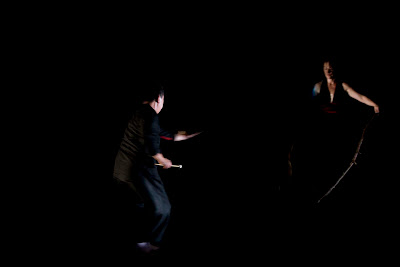 Anyone interested in seeing branch dances developed for the stage is invited to attend the the Temple University Department of Dance Faculty Concert this Friday and Saturday April 4 & 5 at 8PM in the Thomlinson Theater on Norris and 13th Streets. Tickets are $15 general admission/$13 students and senior citizens/FREE for students with OWLcard .

Toshi and I will be performing Balancing Acts, a duet created originally for the 2007 Philadelphia Live Arts festival. Reviewing the performance for the Philadelphia City Paper Janet Anderson wrote: “Best is Soto herself performing with Toshi Makihara, a human musical instrument, who prowls around her shaking rattles, ringing bells, banging gongs and beating the floor. This is primitive, adversarial and odd, and yet quite beautiful all at the same time.” http://flirt.citypaper.net/fringe/2007/show.php/id/95/

I am excited to again be performing with Toshi in a theatrical venue. We open the program so if you are planning on seeing us be on time.

Also on the program are works by Kun-Yang Lin, Kariamu Welsh, and guest artist Lisa Kraus. 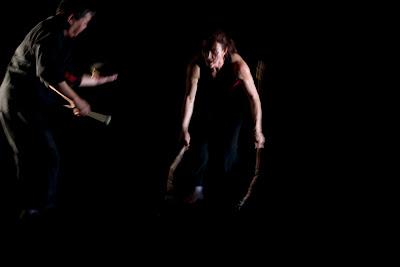