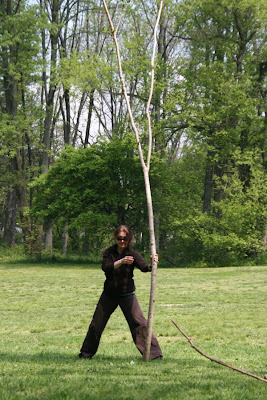 The weather cooperated with us yesterday. After a week of gray weather I was hoping for it to break. As if on cue, a few minutes before beginning the performance, the sky cleared allowing sunlight and warmth.

There were two giant thorny branches waiting for us when we arrived at the site. Where did they come from? They were not from any nearby trees, someone must have dragged them there from the woods, maybe they intended to cut them up for firewood. Jumatatu and I were the first to arrive to the site. We claimed the branches.

It was exciting to work with these giant branches. I wanted a new challenge. What dance would emege from working with this branch? For me working with the added length and weight anchored me, slowed me down. The dance that emerged was simple, slow, and dramatic. 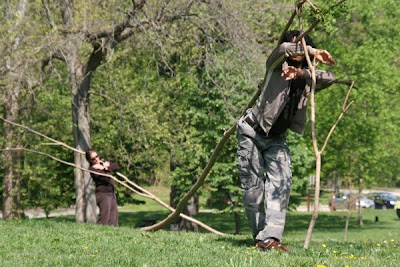 The sun in my eyes sent the vision inward. The thorns on the bark made it difficult to grip the branch, I would have to hold it lightly. The weight made this a challenge-- don't grip the fingers or the shoulders; find a way to counterbalance the weight; balance the effort throughout the body.... BALANCE. 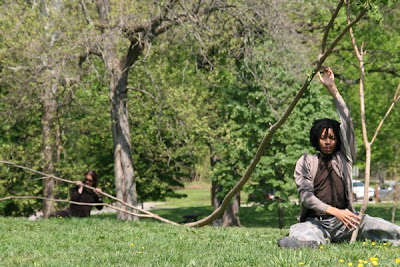 Mine was a dance of a lot of outward stillness and dramatic breathing. Not so for Juma who worked with with two branches, like a nomad carrying his home on his back. 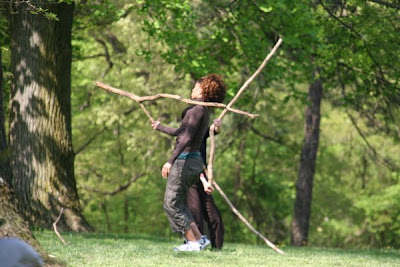 I was struck with how often when I would look out from inner awareness I would notice a common theme moving through the group.


Shavon worked with a long forked branch. Here we see the delicate fullness of the gesture in this balance on two points. 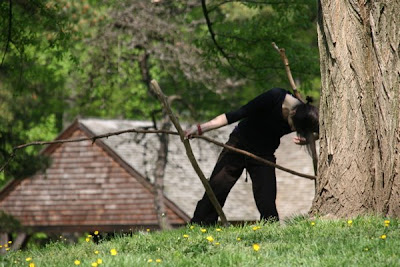 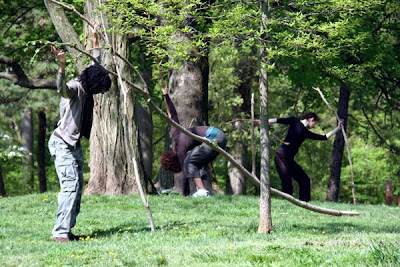 Working by the trees and with multiple branches added layers of triangulation. 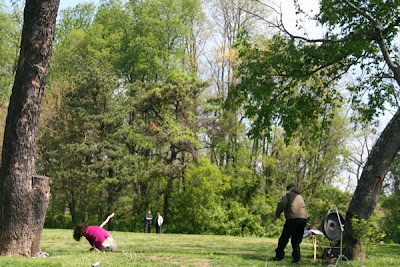 Noemí and Toshi were farther away.
Toshi's music was a wonderful connector bringing the group together but also coonecting to the sounds of the birds and even the metal baseball bat cracking every so often, as if in response to Toshi's playing. 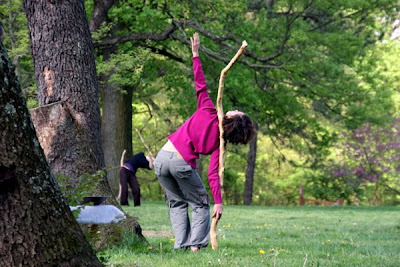 Posted by Merian Soto Performance Practice at 4:26 AM

in the in between
i went and visited home
and did this dance
for mom & dad
by the ocean front
in Rincon, PR

this one too!
every time i did my morning or beach walk and i found a branch:
i could not help it, but dance...
practice do what we do... i had more than a few branch dances while visting familia en aguadilla
y en rincon....

i found this curved branch absolutely stunning... gave me such different information..i could not help but relate it to
a huge branch smile-ing...