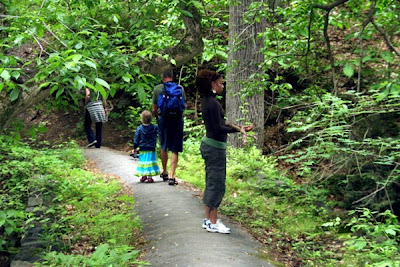 Change is in the air.
Yesterday's performance was the last of the Spring cycle and the twelfth of the year. Even though the performance practice remains the same we all feel the change that comes with the seasonal change, with the warmer temperatures, with the denser foliage. The sound of the park has changed as well. While still relatively quiet the silence was punctured by the
playful scampering and barking of dogsand their master's calls. 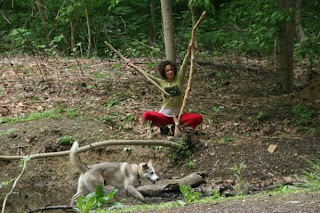 Yesterday was fairy day. The fairy performances in the series are distinguished from the other
performance structures in that the performers are spread out over a large area. Most of us can catch glimpses of only one or two other
performers, but no one can see
everyone else. In essence then,
the fairy dances are five solo dances performed simultaneously with Toshi's music and performance uniting all.

In the fairy dances the performer's isolation and distance from each other accentuates the dancer's subjective experience in performing the branch dances. As we reconnect after the performance each artist has a different story to tell, yet as always, certain themes run through all the stories. Yesterday we all spoke of the change in the air; and we all spoke of the dogs. 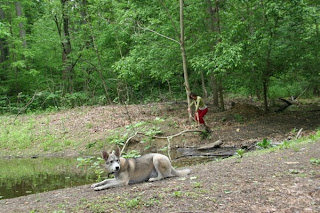 Toshi, Noemi, and I were by the pond:
Noemí was in the Southeast, right at the edge of the path by the pond, Eleggua's messenger greeting audiences and animals at the crossroads. 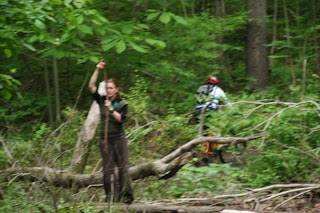 I chose to perform on the Northwest side of the pond balancing on a downed tree. 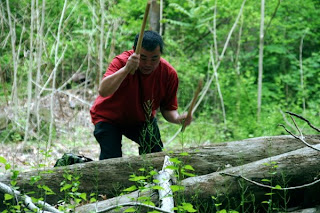 Toshi was midway between Noemí and me, as always making music with tree trunks, branches, and rocks. Later he moved down the path, a pied-piper with bells. 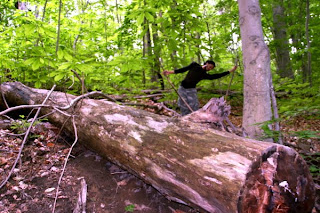 Juamatu chose to work along the South side on the side of the hill high among the trees. 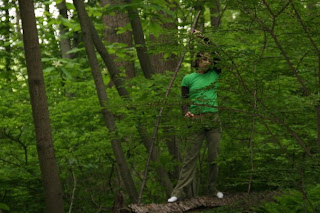 Olive was on the other side of the path , also high, but balancing on a log that hangs along the edge of the path. 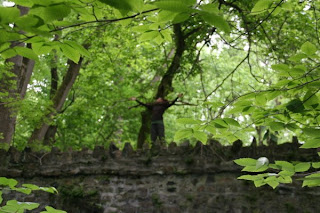 Shavon performed high on the bridge, connecting earth and sky. 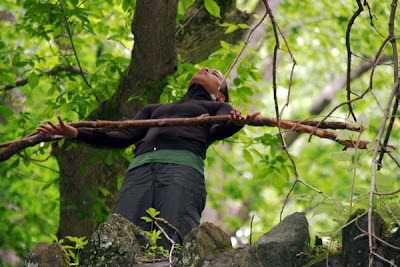 loved the noisy-ness
of this performance
it was challenging
and stimulating.

there was a lot to take in:
dogs running, kids giggling, people talking and meandering around and about... insects, nature be/coming alive = full on spring! a magnificent dance!