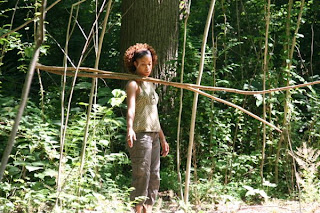 I am writing about the final performance of OYWPP 10 days after it took place. Life happens with all the responsibilities and distractions that take up all our time. I also needed some time to soften. There was much intensity around that last performance, building up in part because of the frequency of performances in June (this would be the fourth week of performing every Sunday), and the anticipation of the end of a graceful and fulfilling process. We were already saying our goodbyes and beginning to feel nostalgic. 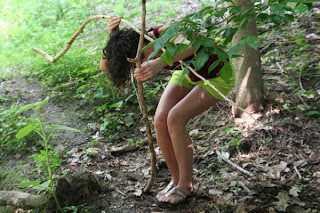 This performance was to be quite different from the rest. The fairy performances along the Mt. Airy Ave trail were designed to be spaced far apart, each artist in her/his own space with the audience moving freely through the park, approaching from any direction. However, knowing that the project was ending we wanted to stay close today, to work as a group. We had also talked about repeating the structural ending of the previous performance, a pilgrimage where we walk away from the performance area together. 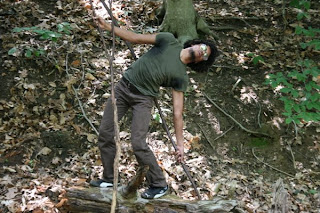 So we chose to gather around the pond. Jumatatu chose to work across the path, high enough up the hill to maintain visual contact with all of us. I chose to balance on a downed tree among a bunch of logs and branches on the NE edge. Noemí stood under her familiar tree on the SW edge of the pond. Toshi worked by the gravel and rocks along the eastern edge, and Olive and Shavon worked along the northern edge. We chucked the idea of a pilgrimage; I thought it would be too difficult to walk slowly among branches and shrubs without losing our balance. Instead we would do a slow rise from low to high. Simple, uplifting. 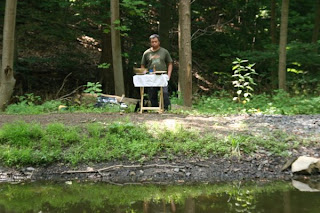 We each set our cameras and took our places around 10:20, beginning before the "beginning" (cued by Toshi at 10:30 sharp) to center ourselves. As soon as audiences began to gather I regretted the chosen set-up and structure. Audiences walked a bit off the path and remained on the southern edge, watching as if on a set, never venturing further into the park. The set-like quality of our positions around the pond invited the audience to watch, not move. Oh no! 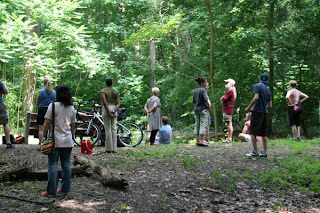 How I wished we had followed the fairy structure! I imagined that this was looking almost operatic! I am well aware of the theatrical potential of the work ( which I exploit somewhat by the waterfall) but I have been focused on developing structures that involve a more active stance for the audience, the placement of artistic practice within the everyday. There is an ego element in presentational structures that I am trying to steer away from in this work. And sure enough, ego came a calling! As I realized my "mistake" I was filled with doubt, embarrassment, disappointment, and a desire to fix this. 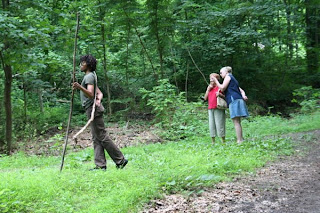 But there was/is no turning back. The present is one. The awareness had/has to be refocused. Be here now! Slow down, stay connected, release judgment. I am responsible for this work. There are no mistakes, just opportunities. And so I/we stood, and slowed down, and opened the joints to move into balance and alignment, harmonizing with the place and each other. 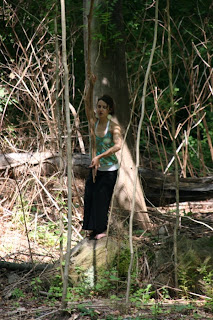 The place: The pond is low but not too dry as there has been rain recently. Its green and lush, summer, hot and humid, the occasional clouding accentuating the play of light and shadow. There's not much of a breeze, its quiet, still like us. The bugs are out; I can feel them around my legs and arms but I can't hear them, they are staying away from my head generously doused in insect repellent. A small white butterfly plays near me. I harmonize with its flutter. I respond with tiny rapid shifting in the torso. 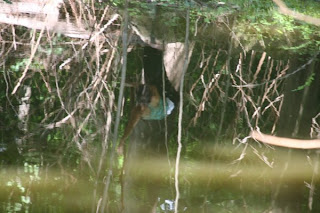 I look out to see everyone, the dancers, Toshi. I recognize some audience members. I shift back to the inner space. The process then takes me to a place I had not explored in the project-- down, way down to the ground as I am drawn to lay on the tree trunk I was standing on. Another voice of oh no! Why am I trying something so new in performance when there are so many people out there? Will I be able to find my way up again gracefully, grace being such an important part of the work, a close cousin to balance? Again I had to remind myself Be Here Now! Stay with where you are. Have the courage to stay conscious of this particular moment even in the face of doubt. Believe in the work. Know that the body will find a way. It can be such a scary place riding the edge of the will, yet thrilling, like being on an Outward Bound expedition inside your own body. 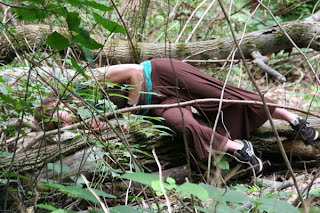 I stay down allowing my body to release into the tree trunk. Unlike the previous performance which was about saying good-bye, the theme of this performance for me is trusting, owning, and standing with the work. These are essential elements of the practice, the starting place really. So in the end it was back to the beginning for me as the work and I (as performer) were put to the test. I spent much of the performance stilling the inner chatter filled with judgment, insecurity, and disappointment. Maybe this is the theme of "struggle " that Annie Goldenberg, in the audience, experienced. 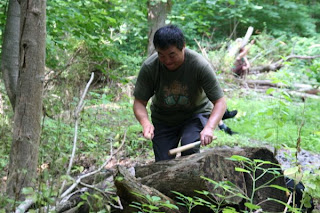 When Toshi played the bells signaling that the end was near, I felt relief. I had held my space, but it had been a struggle and I was tired and sad. As I made the slow rise I connected with each of the artists, I was surprised to see that Jumatatu was making his way to the pond. Shavon too was on the move. Are/were we doing the pilgrimage? I started to move towards them but realized I had not the energy or inclination to pursue this somewhat impossible task of performing a slow pilgrimage among all the downed branches and logs. I would hold the space and remain connected until we found an ending. 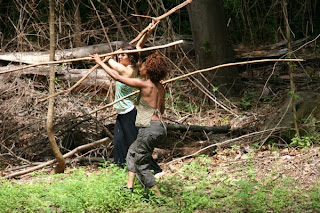 Shavon was moving faster now, passing Olive who had been standing on a rock, and moving closer to me until she was facing me. She took the branches up, like wings. The moment she began to lower them laying them down on the ground like tracks marking a path between us, I knew she was honoring me. For a brief moment I felt another oh no! coming. Something in me wanted to run away — self-defeating thoughts rushed through me, I wish she weren't doing this, this is way too dramatic, the audience won't understand. 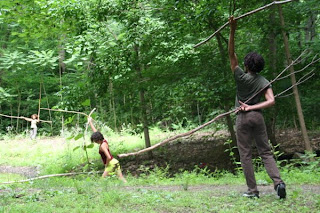 But I would not dishonor Shavon or the work by giving into my negativity. In a flash I understood that this was our moment, that this moment, these actions belonged to the dancers and were specifically meaningful to the artists and friends who had participated in the project throughout the year. Its not to say that we were wanting to exclude the audience, but who and what mattered most in that moment were each other, honoring each other and the work, and this for me this meant honoring Shavon (and later Olive, Noemí and Jumatatu) by receiving her offering of love, respect, and admiration. As she lowered herself to bow to me I joined her, bowing to her. We hugged and cried and thanked each other low to the ground, to the earth, the source. 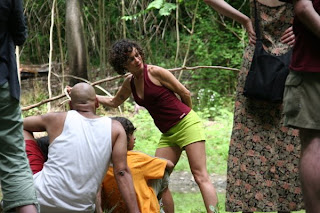 As we separated and she moved away I looked to find an ending only to realize that Olive was approaching with the same intention. Behind her were Noemí and Jumatatu. What a phenomenal and dramatic ceremony of honoring! I knew I could not move from my spot. I would receive and return their love, their hugs, and their tears. How does one stay open to an open heart?


We have been co-travelers on a phenomenal inward bound adventure of the body and spirit through the seasons, the weather, and the elements. It has been beautiful. It has been a gift. It has been an honor.